In California, 46% of students in the foster care system do not graduate high school. Foster youth are not the only children struggling to succeed. Teens living in poverty are 25% less likely to graduate from high school than their middle-income peers. Knowing these dismal statistics, Orangewood Foundation’s vision was to create an educational environment that would help students graduate and ultimately break the cycle of generational poverty and abuse. That school: Samueli Academy.

As a public charter school, private capital is needed to buy the land and build the school.

In late 2011, a $25,000,000 capital campaign was launched to build the first and second phases of the project. It was completed in 2015 thanks to the many individuals, corporations and foundations who rallied together to support the high school.

A third $35.5 million phase capital effort is now underway. The Campaign for Innovation in Education will fund the building of a Residence for foster youth, 7th & 8th grade building and a Student Innovation Center. 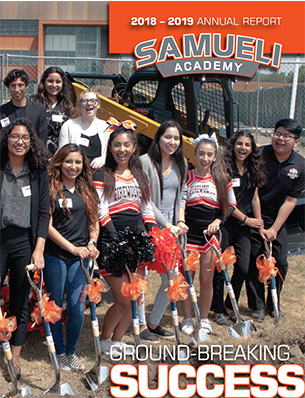 YOUTH CONNECTED RESIDENCE
Foster youth change placements as many as 22 times by their 18th birthday. This often means a change of school. As you might expect, this upheaval and instability negatively impacts their educational progress. Working collaboratively with former foster youth, Orangewood Foundation designed the Youth Connected Residence. It will be the next level of care afforded to foster youth on the Samueli Academy campus. “For housing to be on campus…that will be huge. I could have focused on school instead of worrying about my living situation,” a former foster youth states.

7th/8th GRADE BUILDING
Too many of the students who come to Samueli Academy as freshman are multiple years behind grade level in Math and English. Passed from one grade to the next without sufficient understanding of the fundamentals, they cannot write a full paragraph or complete basic math problems. Because students must pass their classes in high school in order to graduate, it is our job to get them to grade level as quickly as possible. Samueli Academy has done an excellent job of helping to catch a student up academically but we can be even more effective by starting to work with that student two years earlier.

The Campaign for Innovation in Education
is being spearheaded by Campaign Co-chairs Susan Samueli and Shannon Tarnutzer and Capital Campaign Director, Pam Shambra. If you would like to make a contribution, please contact Pam at 714-619-0211 or pshambra@orangewoodfoundation.org 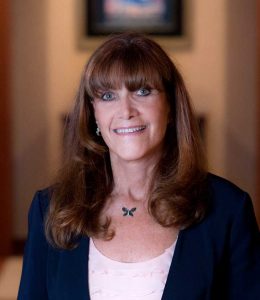 Susan Samueli was born and raised in Los Angeles, CA. She earned a B.S. in Mathematics from UC Berkeley in 1972. From 1972 to 1985 she was with IBM Corporation, where she worked initially as a software programmer in the Federal Systems Division, Westlake Village, CA, and then as a Systems Engineer in the National Marketing Division, Los Angeles, CA, providing technical marketing and sales support for IBM’s mid-range computer systems. In 1985 she left IBM and focused her energy on raising her children, at which time she developed a keen interest in alternative health care. She developed an active consulting practice in the areas of nutrition, homeopathy and Chinese herbs, and subsequently received a Ph.D. degree in nutrition from the American Holistic College of Nutrition in 1993 and a diploma in Homeopathy from the British Institute of Homeopathy in 1994. 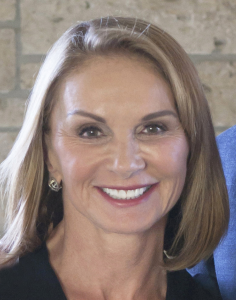 Shannon Tarnutzer has served on the Board of Orangewood since 2008. She joined the Samueli Capital Campaign during Phases 1 & 2 and is now Co-Chairman with Susan Samueli of Phase 3. Shannon and her husband Byron own Allspace Storage and have two daughters and three granddaughters.

Call or email Pam at 714-619-0211 or pshambra@orangewoodfoundation.org

February 15, 2012 – The Orange County Department of Education’s (OCDE) grants its first-ever Charter to The Academy.

August 22, 2013 – The Academy opened its doors for the first time to the inaugural class of 127 freshmen. 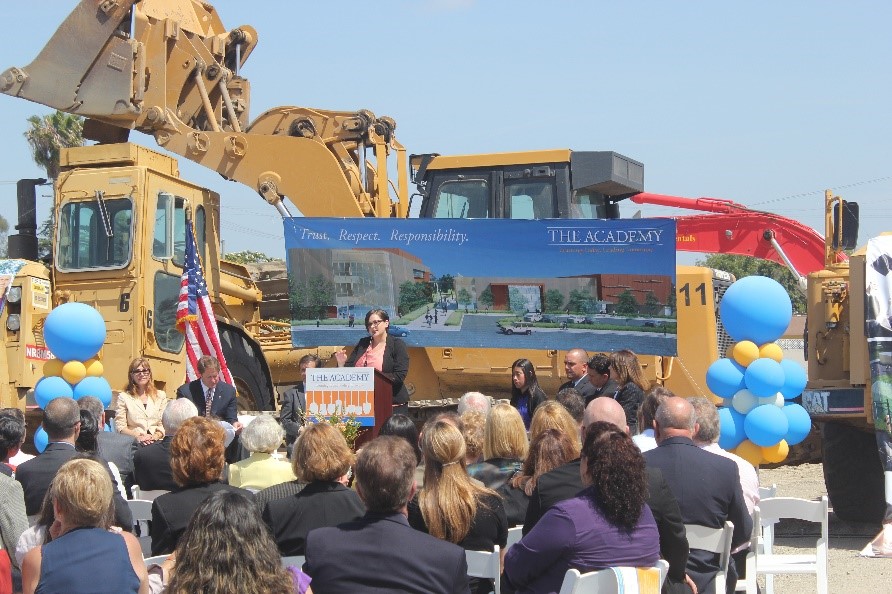 April, 2014 – Ground is broken on the permanent three-story Academic Building (above).

July 3, 2014 – The Topping Off Ceremony of the Academic Building is held (below). 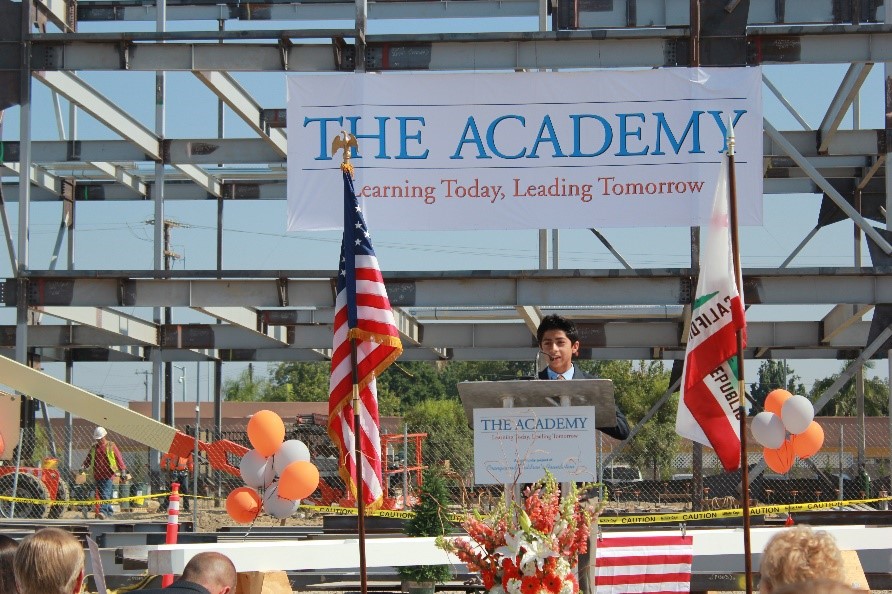 August 17, 2015 – The Academic Building and Dhont Community Center opened to students and the third class of 130 freshmen began school.

November, 2016 – A Student Alumni Director was hired to ensure a smooth transition into college and college persistence for the soon-to-be graduated seniors.

June 12, 2017 – The inaugural class of Samueli Academy graduated. 99% of students graduated. 98% were accepted into community colleges or four year universities.

March 2018 – The Charter is renewed by the Orange County Department of Education.

February 2019 – The State of California approved the residential education program for implementation.

May 2, 2019 – Ground is broken on the Residential Building, Student Innovation Center, and 7th & 8th Grade Building. 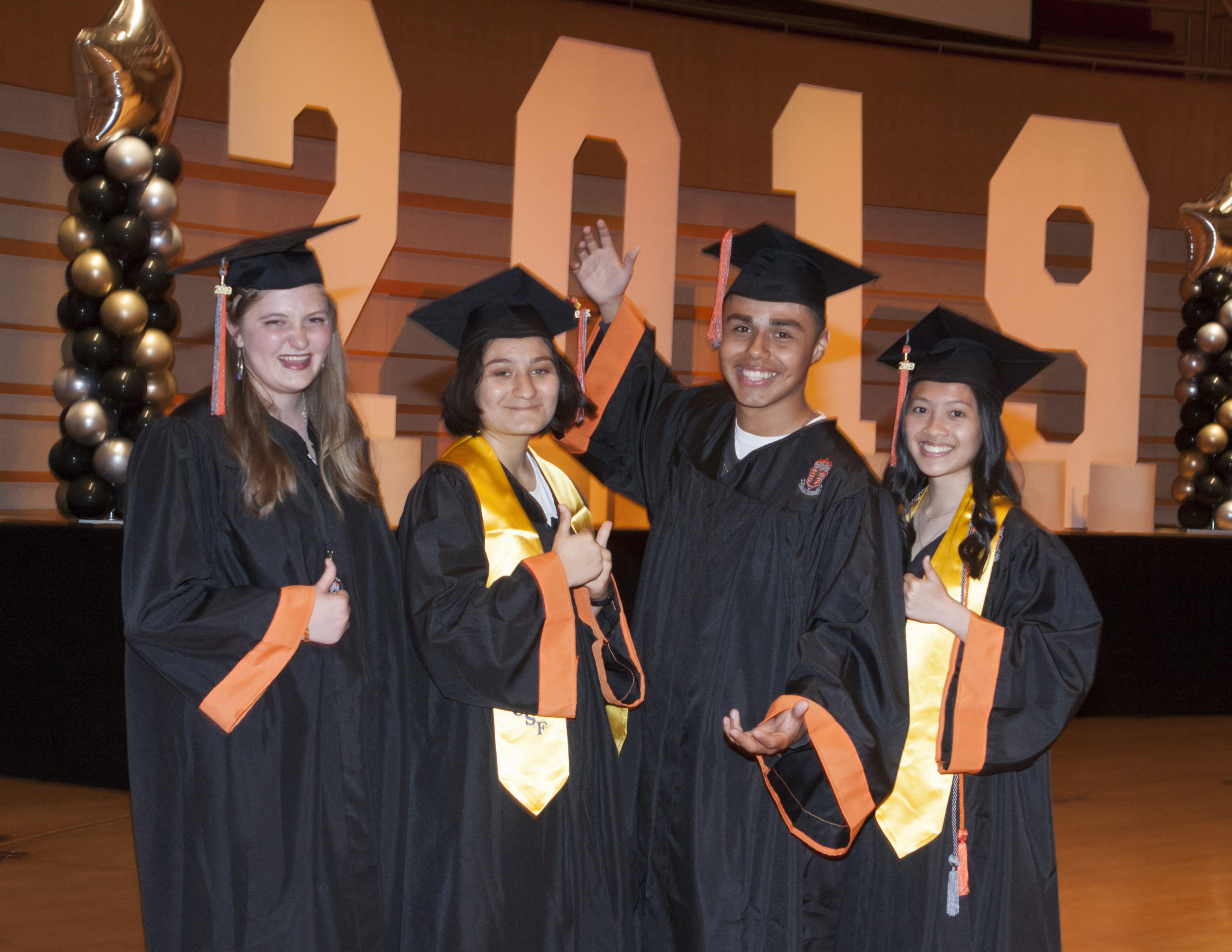 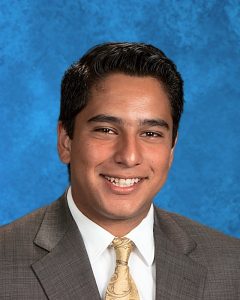 “Samueli Academy changed my life in so many ways. Coming from local gang areas, I didn’t think I would ever be in a college environment. I always saw myself going to go work for my dad’s landscape business. Samueli Academy opened plenty of doors for me. They opened doors to an internship in an office, which I never, ever imagined myself working in.

Because of Samueli Academy, I have hope that I’m going to be working in an office. I’m hoping I will make a difference in the world. Mr. Polizzi, Mr. Kalbenn and Mr. Saba never, ever, gave up on me. They’ve always been there for me and they’ve always pushed me to succeed and they’re the reason that I graduated. I don’t know where I’d be right now if it wasn’t for Samueli Academy.” 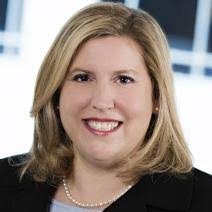 “Samueli truly is a unique school, a place where learning is exciting and connected to 21st century job skills. It’s a community of engagement, inclusion and being connected. The teachers and administration are connected to business people to make sure that the students are ready no matter what career they take. They are connected to and care about the students. Whenever the school contacts me, it’s always, “how can we help?”

My son has been on an IEP throughout school. He is incredibly shy. I’m beginning to see him flourish and build more confidence. I’m just so blessed that he’s able to attend this school because if he hadn’t he would be lost.” 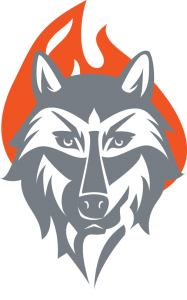 “I went to 13 different schools as I grew up. I’m actually a high school dropout. I knew that I wanted my child to go to the best school and not go through the obstacles I went through. When Samueli Academy opened up I researched it. I knew this was the school for her. She didn’t want to go there at first. She wanted to go with her friends. She loves it now. She loves the people…the teachers and her new friends. And she loves the project based learning. It’s easier for her to retain information she learns and it’s more hands-on which is I think very important for anyone that is learning anything new. She also loves small class sizes and the field trips which are opportunities to go see other companies.

I think the Samueli Academy is a blessing. I wish there was something available like this for me when I was growing up because maybe I wouldn’t have dropped out of high school.” 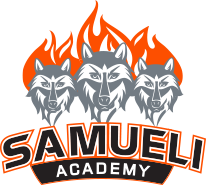